The International Monetary Fund (IMF) and World Bank held their annual spring meeting this week. As part of the festivities they released their World Economic Outlook. Dismal reading! With the title “War Sets Back the Global Recovery,” the IMF downgraded its estimate of global growth significantly. It now sees the global economy growing by 3.6% yoy in 2022, down from 4.4% that they estimated just a few months ago (January). At the same time, they forsee inflation at 5.7% yoy in the advanced economies and 8.7% in emerging economies – 1.8 ppt and 2.8 ppt higher than projected in January.

This pattern – slower growth, higher inflation – puts central banks into a conundrum. What to do? Keep policy loose to foster growth, or tighten to beat inflation? So far the verdict is unanimous: their brief is to fight inflation and that’s the main priority. The market is assuming that interest rates will continue to move higher at least until the end of next year (except in Japan). 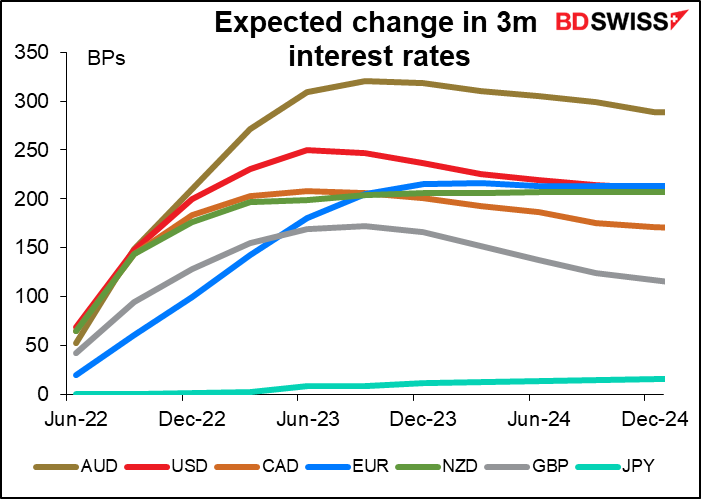 But with fiscal policy also shifting tighter too as governments rein in their budget deficits, there’s a real risk of policy overkill sending economies into recession. The likelihood of a recession rose greatly after Russia invaded Ukraine, because of the sharp rise in energy prices – this acts like a tax increase, siphoning off money that would otherwise be spent on other things. The Eurozone, which is most directly affected by the war, is seen as having the highest probability of a recession. This then is going to be the likely theme for the markets over the next several months: the risk of inflation vs the risk of recession. Which way will central banks tilt? Now when inflation is the major problem and growth is relatively solid they’re happy to talk about the need for 50 bps hikes to keep inflation expectations from getting “unanchored.” But will they be willing to tighten policy enough to achieve this?

The San Francisco Fed has broken down the causes of US inflation between excess demand (red) and insufficient supply (blue). Despite all the issues with supply chain difficulties, the bulk of the problem (so far as they can determine) is due to excessive demand. 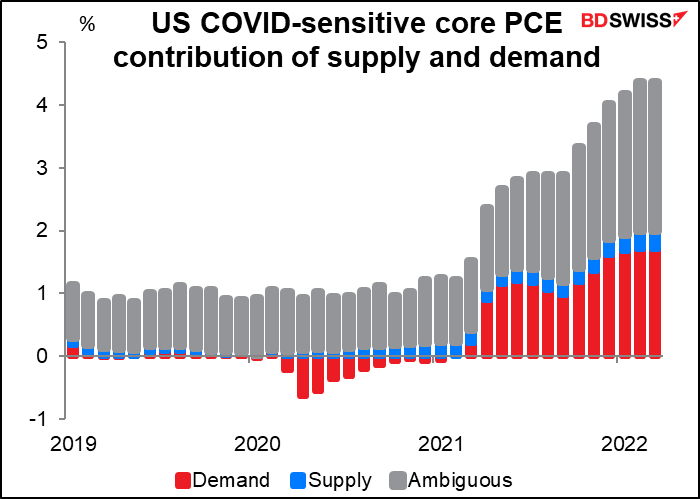 In order to quell that excess demand the Fed is going to have to tighten policy considerably – far above the neutral rate of fed funds, which they estimate to be around 2.4%. The market is already pricing in a peak fed funds rate of 3.24% in Nov. 2023. Other central banks may also have to go similarly beyond their neutral rates. The possibility that central banks shift to a restrictive stance and the implications of such a move for growth are likely to be one of the major issues for the market in the coming months.

There’s only one major central bank meeting next week and it’s the perennially boring Bank of Japan. Its recent large-scale intervention in the Japanese Government Bond (JGB) market to keep the 10-year yield within the ± 25 bps range around 0.0% as specified in its “yield curve control” (YCC) policy shows conclusively that it’s in no mood to change policy right now. (The Bank has announced that it will buy an unlimited amount of 10-year JGBs at 0.25% from April 21-26 to defend the upper limit.)

The problem though is that other central banks certainly don’t have a similar policy. As the gap widens between Japanese yields and those of other countries, which are rising and rising, money naturally flows out of Japan into currencies where investors can get a higher return. The yen has been weakening as a result. 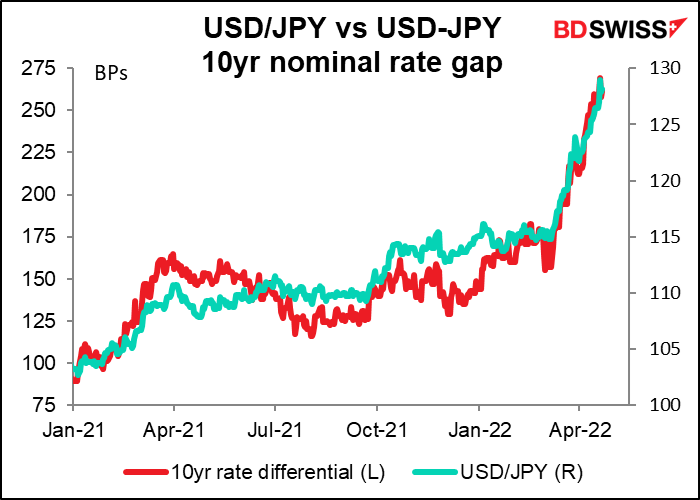 Recent comments by Bank of Japan Gov. Kuroda and Finance Minister Suzuki show that they’re getting worried about the weak yen. The question is, will they alter their policy to stop the currency from falling?

Japan is the country where “pleasant surprise” is an oxymoron. Any changes in policy are usually well telegraphed ahead of time with copious leaks to the newspapers. Even if they are just thinking of changing policy, they usually leak something to the press to see what the reaction will be. Thus the fact that we haven’t heard anything yet suggests to me that nothing substantial is likely.

They could tinker with their forward guidance. Right now they say that “For the time being, the Bank will closely monitor the impact of the novel coronavirus (COVID-19) and will not hesitate to take additional easing measures if necessary, and also it expects short- and long-term policy interest rates to remain at their present or lower levels.” Given that the number of virus cases has come down recently (although it remains much higher than last year) and that the government has loosened restrictions somewhat, they could remove the bit about “additional easing measures” or “or lower levels.” 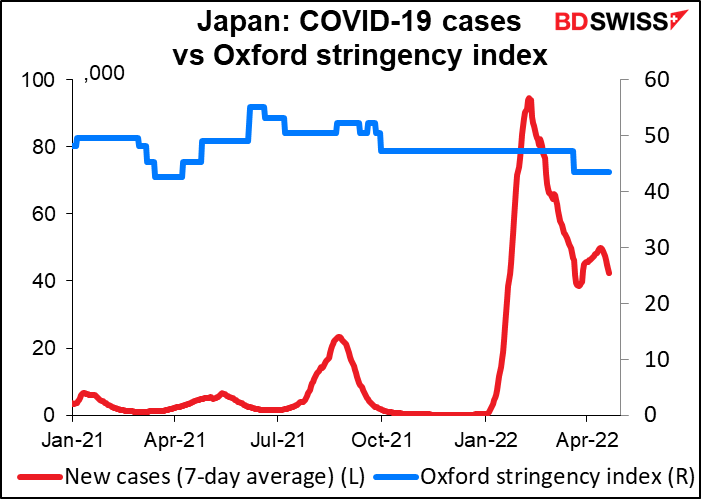 However, the BoJ is also going to release the April edition of its quarterly Outlook for Economic Activity and Prices. The market has sharply downgraded its estimate for Japanese growth this year while still not forecasting a return to the 2% inflation target. Similarly, the IMF revised down its 2022 growth forecast for Japan by a sharp 0.9 percentage point to 2.4% due to higher crude oil prices and coronavirus-linked restrictions on social activities (which I have to say don’t look so stringent, according to the Oxford Stringency Index). Given these changes, the Outlook Report is also likely to revise down its forecasts for the economy. That would probably rule out any change in the bias of policy. 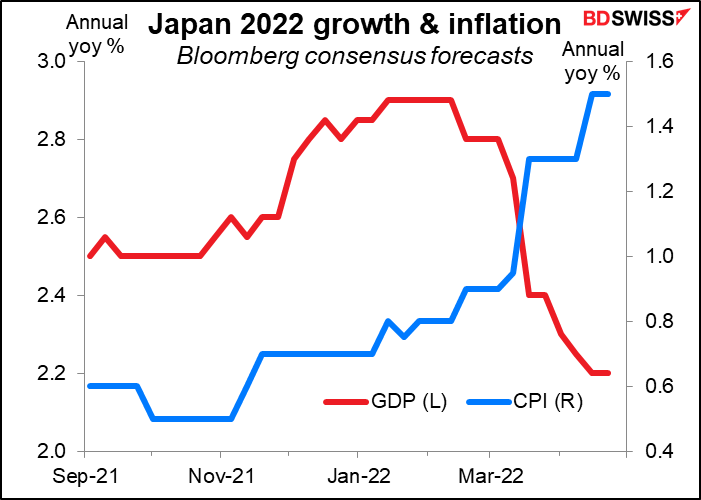 With everything on hold then the focus will be on BoJ Gov. Kuroda’s comments at the press conference. Here too I can’t envision a sudden change of heart from the views he’s held for ages. At the Lower House’s Committee on Audit and Oversight of Administration meeting on April 18, Gov. Kuroda said that a sharp depreciation of the yen would increase the negative impacts on the economy through A) increased uncertainty, B) an increased burden on household finances from higher import prices, and C) lower earnings at small- and medium-sized enterprises (SMEs) that are unable to pass on the increase in import prices. His criticism though was aimed not necessarily at the depreciation of the currency but rather at how rapid it’s been. He said that he hasn’t changed his view that yen depreciation is a positive for Japan’s economy as a whole. At most I could see him once again emphasizing the harmful effects of a rapid depreciation of the currency, but that’s more a comment about the pace of the yen’s move, not the direction.

Net net, I expect the meeting will be a disappointment to those who are looking for the Bank of Japan to call a halt to the yen’s decline and the currency could weaken further after the meeting.

The news from the inflation front is expected to show that inflation is rising more slowly but is still rising. 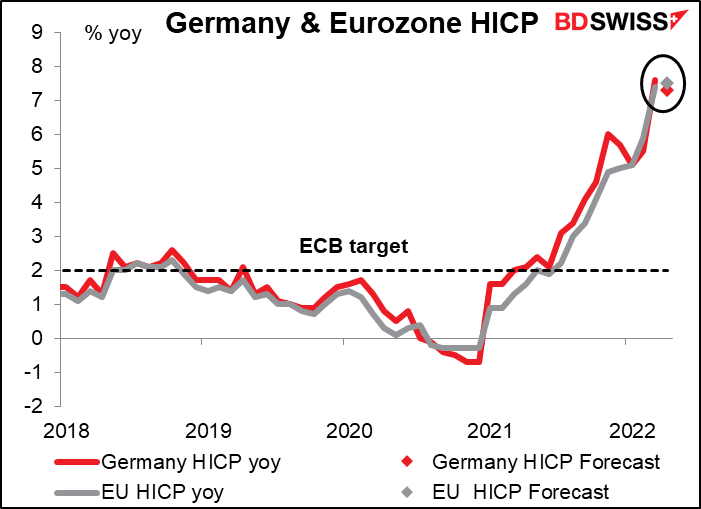 Australia’s CPI is expected to explode higher. The forecast quarterly rate of change — +1.7% qoq – is higher than the annual pace of increase just a few years ago. The Reserve Bank of Australia (RBA) said that it expected “a further lift in inflation over coming quarters,” but this might be a bit too much. 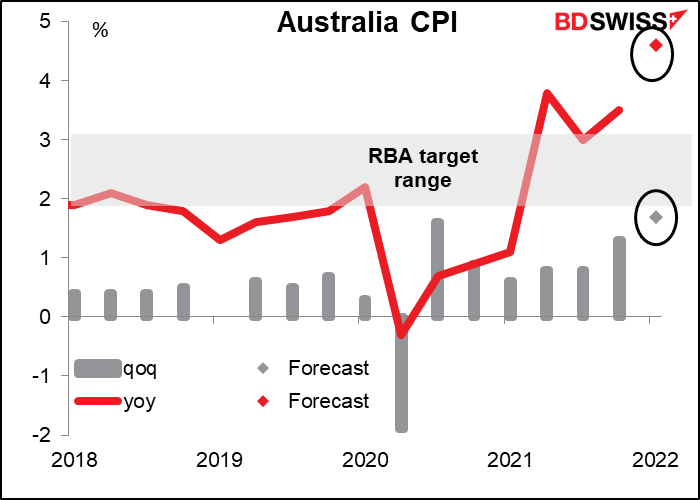 The statement following the meeting and the minutes made a lot of the fact that “Inflation has increased in Australia, but it remains lower than in many other countries.” That was certainly true at 3.5% yoy; it’s still true, but less so, at the forecast rate for Q1 of +4.6% yoy (see chart). 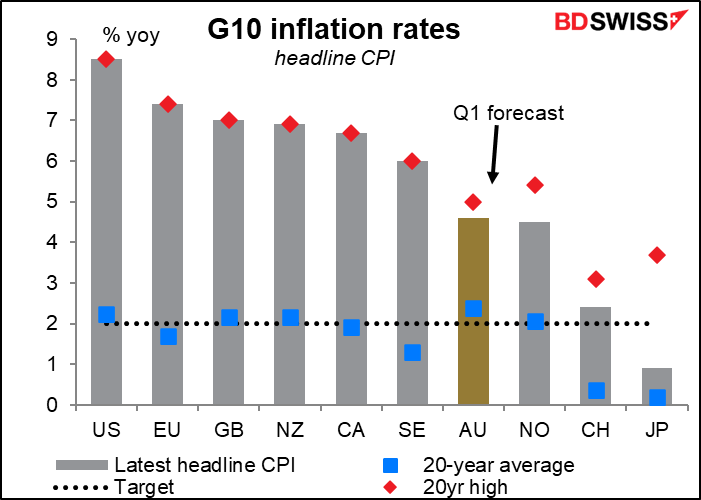 From reading the minutes it sounds to me as if the RBA is waiting for the “updated set of forecasts to be published in May” before they make any changes to their policy. This will be the last inflation update before the May, June, and even the July meetings so it will be quite significant.

The US personal consumption expenditure (PCE) deflators could be interesting. The headline figure is expected to rise further, but the core measure is forecast to slow by the merest 10 bps. Not much, but it doesn’t take much to qualify as progress at this point. 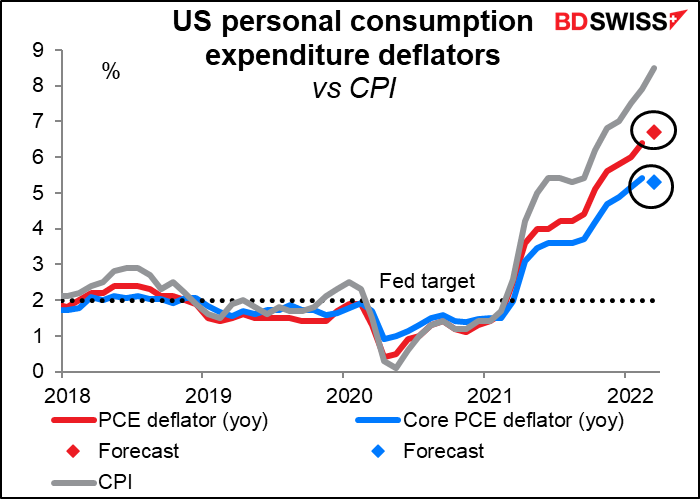 Furthermore, the annualized 3m rate of change in the core PCE deflator is expected to slow notably, from 5.9% yoy to 4.7%. That could trigger thoughts that inflation is peaking on its own accord, which would require less help from the Fed = USD-

We’ll also start getting the Q1 GDP figures during the week. Most of the major European countries announce on Friday, including Germany, France, Italy, Spain, and the EU as a whole. Growth in France, Spain, and Italy is expected to be below Q4 rates, but Germany is forecast to see an improvement from the -0.3% qoq decline of Q4. 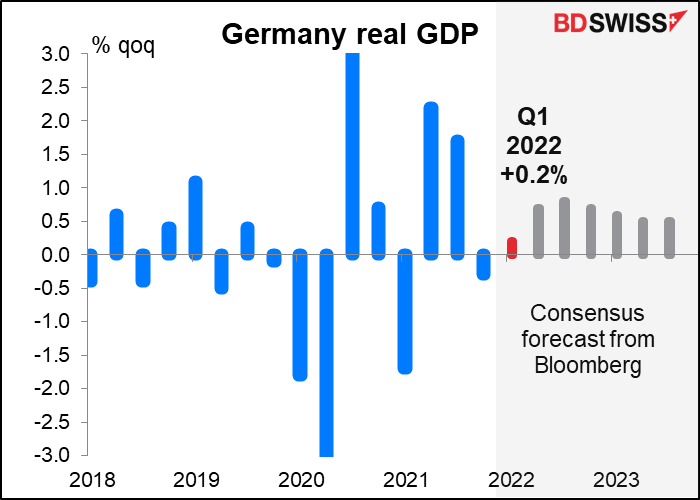 The Eurozone as a whole is forecast to grow at an unchanged pace of +0.3% qoq. 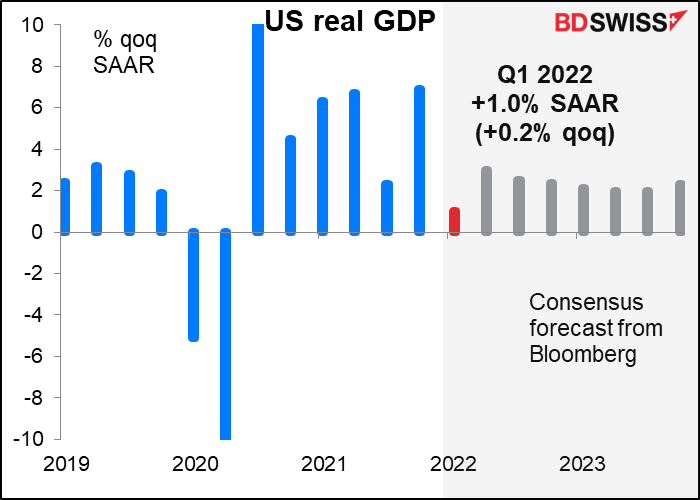 The US recovered to its pre-pandemic level of output in Q2 last year. For the Eurozone as a whole, that didn’t occur until Q4. For Germany though it’s not expected to happen until Q3 this year, and if the war in Ukraine drags on and Germany eventually decides to cut itself loose from Russian energy imports, that could come even later. 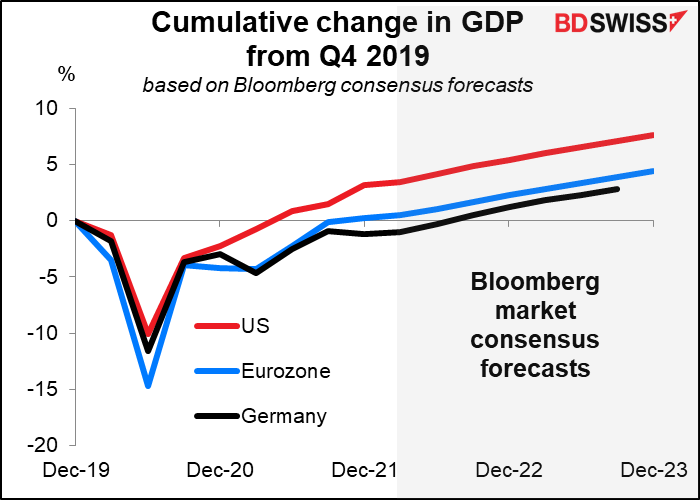 Canada also releases its monthly GDP for February on Friday.

There are other indicators worth looking out for next week too.

In the US, we’ll get durable goods and the Conference Board consumer confidence figures on Tuesday, and of course the personal income & spending data will be released with the PCE deflators on Friday.

For Europe, the Ifo indices will be released on Monday.

Japan gets its employment data on Tuesday and retail sales and industrial production on Thursday.

One thing we won’t have next week:  comments from Fed officials. The “purdah” period ahead of the May 5th FOMC meeting, during which Fed officials are forbidden “from expressing their views or providing analysis to members of the public about macroeconomic or financial developments or about current or prospective monetary policy issues…” begins on Saturday. 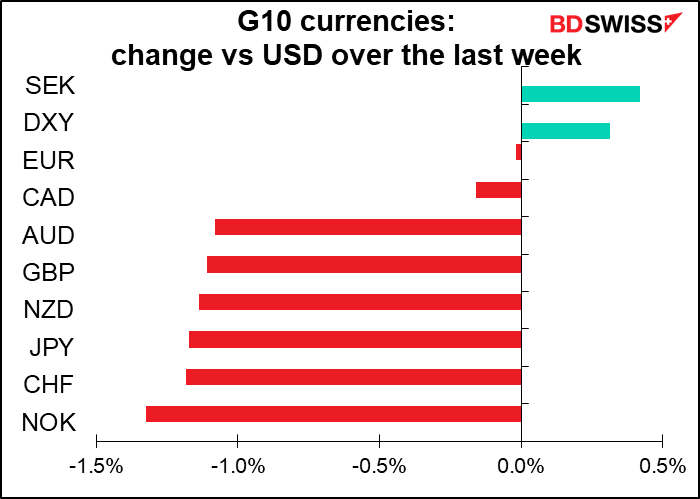 The Swiss shocker, the British turn, the Japanese puzzle